The Concept of Mladostarchestvo as a Tool for Criticizing Religion in Modern Russia: An Analysis of Rhetorical Strategies

This article analyzes the history of the term mladostarets/mladostarchestvo [young elder/young eldership], and at the same time classifies strategies of critical rhetoric within which it is used. The notion in question established itself as a particular type of “clerical” pejorative in the 1970–1980s in church circles in the Russian emigration. At the end of the 1990s, it gained popularity after Patriarch Aleksii II began to use it. Most worthy of note is the use of this term in the context of a pastoral rhetorical strategy, in which abuses in the practice of confession are exposed. Nonetheless, in the 2000–2010s mladostarets/mladostarchestvo began to be used in a series of other rhetorical strategies. Within the context of a socio-critical strategy in particular, this concept is used as a tool of criticism of post-Soviet religiosity as a social fact. In its contemporary phase, the notion is also included in an anti-hierarchical strategy, within which it is applied in a parodic vein. As a result, on the one hand, a sort of “oversaturation” of the term with meanings takes place, and, on the other, there is an intricate interlacing of intentions according to which it is used. The latter may indicate a kind of exhaustion of the semantic resources of the term.

Eugene I. Lyutko, PhD, Research Fellow at St Tikhon’s Orthodox University. He received his MA in History from the Department of History at St Tikhon’s Orthodox University (2012) and earned his PhD in Theological Studies from the University of Vienna (2022). He currently works as a research fellow at the Research Center for the History of Theology and Theological Education and at the Ecclesiastical Institutions Research Laboratory, St Tikhon’s Orthodox University. His main research interests lie in the area of the interdisciplinary study of Russian Orthodoxy, including its hierarchies, leadership, historical imagination, theology etc. Some of his latest publications are: Vozniknovenie klerikal'noi korporatsii na Zapade XI–XIII vv. i v Rossii XVII–XVIII vv., 2020; “The Handbook for the Clergy (1988) as a theological patchwork in the late Soviet context, 2021; Dukhovnoe»—k voprosu ob istorii poniatiia (XVII–XIX vv.), 2021. 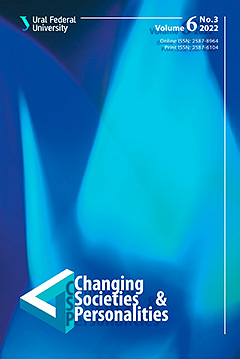