The article examines social instruments used to consolidate small religious groups in modern society. Such groups are viewed as a variation of the development of a local Orthodox parish founded as a community of like-minded people. The research subject is closed religious community that has existed in the Perm region (Russia) for over thirty years. The community has evolved from a typical Orthodox parish to a modern-type spiritual group that used non-Orthodox sources of information and devotion, and was led by a woman. The study identifies most effective social instruments for the consolidation of those type of religious community. The research includes reconstruction of the history of the community and the analysis of the materials of spiritual seminars held there, reflecting gradual transformation of the teachings and change of the leader’s status. The research data were acquired from several sources: interviews and personal correspondence of the author with former members of the community, materials of journalistic investigations, etc.

Svetlana V. Ryazanova, Doctor of Philosophy, is a Leading Researcher at the Perm Federal Research Center of the Ural Branch of the Russian Academy of Sciences. She is a member of the European Academy of Religion. Her interests are centered around political mythology, religion and politics, and political implications of emerging religions. Svetlana is the author of more than 100 academic publications.  She is also employed as an expert by the Advisory Council of the Ministry of Justice of Perm Region; she is a member of the Perm City Council on Interfaith and Interethnic Relations. Her main publications include: “Fenomen zhenskoy religioznosti v postsovetskom prostranstve (regional'nyy srez)” [Phenomenon of woman’s religiosity in post-Soviet space: regional aspect], 2011 (co-authored); “’Vot lyudi-to tam stoyat, a ty ne mozhesh’: poseshcheniye tserkvi v sovremennom permskom pravoslavnom soobshchestve” [Look, people stay, and you cannot”: visiting the church in today’s Perm Orthodox community]. 2018. 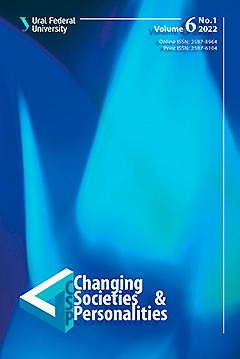