The case of urban development in the Russian periphery is often overlooked in the scholarly efforts to theorize the center-periphery dynamics characteristic of the post-socialist contexts, not least in the case of Russia. Consequently, the analysis of urban development initiatives in the regions and provinces defies the logic of large-scale urban projects with characteristic subdominant relations between the state and the private sector, since the latter and the former are tied in competition for limited federal resources. We delve into the particularities of the center-periphery dynamics through the case of the Vologda River embankment renovation project, paying particular attention to the decision-making processes, lack of transparency, and bureaucratic hustle in response to the civil protest—all characteristic of a distinctive, though common across Russia’s peripheral towns, dilemma of systemic underdevelopment vs basic urban maintenance. We rely on discourse analysis of legal and regulatory documents, project plans, meetings proceedings and official correspondence between departmental agencies, and media posts created by the local protest groups during the period of 2018–2019. Through this analysis, we showcase not only the asymmetries of power relations in the postsocialist periphery, but also bureaucratic constraints and uncertainties that often amount to a standstill situation with uncertain prospects for future improvement.

Vera Smirnova is an urban geographer with research interests in the study of land rights and private property regimes. Her work examines the relations between land and power and their manifestations in post-socialist cities. After completing her degree in architecture from the Vologda State Technical University, she received the Fulbright scholarship for graduate studies in the US and completed Ph.D. in Planning, Governance, and Globalization at Virginia Tech. Recently, Vera joined the Department of Geography and Geospatial Sciences and the Department of Political Science at Kansas State University as a Visiting assistant professor.

Ekaterina Adrianova is an architect, urban planner, and a graduate student of urban studies at ITMO University Saint Petersburg, with a specialization in Sustainable Urban Development. Her research and professional interests lie in the analysis of the influence of politics on the spatial development of cities and territories, as well as the formation of modern sustainability policies. After completing her degree in architecture from the Vologda State Technical University, she joined the professional architectural practice and was engaged in a number of public projects in the field of urban development across the country. 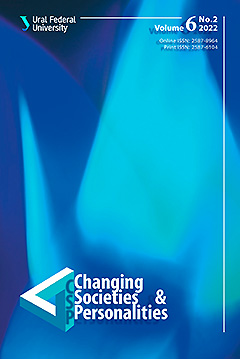