Travel literature provides the readers with access to the most remote places but also reproduces the so-called “traveler’s gaze”, thus connecting and separating people at the same time. Through individual travel narratives globalization processes get inscribed into an individual identity of the author and the reader. This article analyzes how Russia is presented in three travelogues written by American journalists: Andrew Meier (2003); David Greene (2014); and Anne Garrels (2016). These narratives are considered by focusing on the three dichotomies, around which the characteristics of modern societies are constructed: centre/periphery, past/present, and political/individual. Russia’s trajectory of modernity, according to Western travelogues, is predominantly oriented towards the country’s past – the legacy of the Soviet Union and Russian Empire, which means that virtually no place is left for the “future”, associated with democratization, liberalization, individualization, and environmental awareness. As the narrators see it, the centre’s priority is to maintain control over the periphery and to hold the country together at any cost, which makes all other considerations, including the well-being of the people, secondary. Therefore, there is a constant struggle between the political and the individual, with people seeking to protect their private worlds from the encroaching power of the government.

Ekaterina Purgina is Associate Professor of Philology at the Ural Institute of Humanities (Ural Federal University, Yekaterinburg). Her main research interests lie in the sphere of literary and translation studies and cross-cultural communication. She is currently engaged in the research project ‘Varieties of modernity’ (led by Prof. P. Wagner and supported by the Russian Science Foundation). 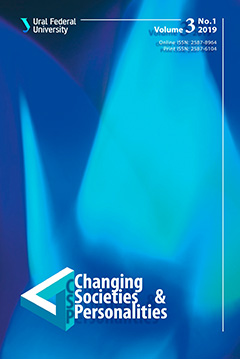