The article considers key factors and directions of the value-institutional evolution of Modernity as a political project. It is argued that the movement of humankind towards the globalised world paradoxically turned not into a denial, but rather into a consistent radicalisation of the axiological political foundations of Modernity. The thesis of the axiological unity and institutional diversity of global Modernity is advanced in opposition to the concept of pluralist modernity as a rhetorically veiled civilisational approach. It is asserted that the constant self-adjustment of the central value system of globalised Modernity is carried out in the context of a non-simultaneity effect, providing grounds for discussions about the insurmountability of pre-modern cultural barriers and traditions of different civilisations. The conclusion is justified that the success of the globalisation of Modernity is contingent upon the possibility of building out the already existing world economy to include world politics, since the economic assimilation of the world by capitalism has largely outstripped the counterbalancing possibilities of its global political regulatory and compensatory systems, contributing to the intensification of conflicts and various inequalities. The increasingly intensive interaction and interdependence of humanity at the global level first implies the creation of ethical mechanisms of world politics based on concern for the interests of humanity as a whole. In seeking the solution to this problem, it is increasingly necessary to go beyond archaised political forms and the logic of decision-making that relates to territorial nation-states. In the discussion about the ethical and political values and institutions of the global, second or late Modernity, the positionsof those subjects capable of presenting a moral game to humanity – open, egalitarian, universal, cosmopolitan approaches for solving general problems – will be a priori strengthened.

Victor Martianov, Institute for Philosophy and Law, Ural Branch of the Russian Academy of Sciences

Victor Martianov, Candidate of Political Sciences, Deputy Director, Institute for Philosophy and Law, Ural Branch of the Russian Academy of Sciences. His research interests are focused on contemporary political philosophy, and theory and methodology of socio-political sciences. He has elaborated the concept of meta-language of socio-political sciences, studied the political concept of Modernity, and introduced the original approach towards the stratification of contemporary societies. The main publications included the following: The Evolutions of Russian Political Discourse: from “Western Democracy” to “the Quality of Democracy” (2005), The Decline of Public Politics in Russia: from Public Politics to Political Administration: the Depoliticization of the Regions (2007), Apologia of Modernity (2017). 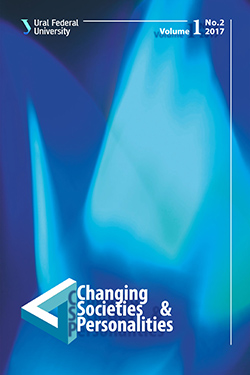